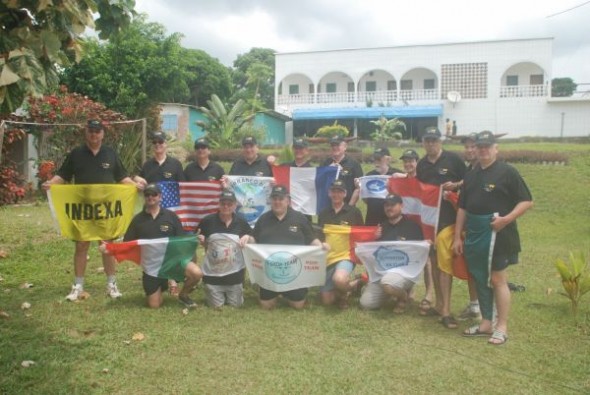 In 2010 we had to cancel a most wanted at the last minute due to a transportation problem; we were very disappointed as everything was ready. But we do not regret tm7cc from Ouessant Island and is0r from Sardinia Island.
So for 2011 we planned again to go somewhere in Africa. Choosing the correct destination is not easy, it should be a compromise between a country on the most wanted list and security, price and many other parameters.

Most things were ready to go back in Togo 5V, but our Italian friends leaded by i2ysb have announced their operation as 5v7tt in October 2010, so again we had to organize something else in a very short time. Very fast, after a discussion with Didier f5ogl, we decided to go in Cameroun (TJ) as there hasn’t been any “serious” activity since many years.

Thanks to the hard work of f6kop team, all equipments were ready on time: 5 stations (the 6th is Dave’s K3), all computers with Wintest logging software, all antennas and little stuffs… As our goal was to make a maximum of qso on low bands, our friend f6aoj did a great job by adding an RX antenna input on our yaesu ft-450 and preparingall beverages and our k9ay. In the same time, Mat f5ped had just finished his 30m 4sq, and John f5vqh our VDAs antennas.

Bob, Dave and Bill arrived a few days before in Geneva airport, and finally  all the team met in Paris on February 10th.

After last phone callswith our families and our pilot f6aml we took the plane; 6 hours later we arrived in TJ land. Our first feel was “whaou it is too hot !”.

We went through the customs and started to store all our luggage in the small bus. It was nearly full only with all the equipment, but 17 ops needed  to find a place in the bus as well. This 2 hours trip to Kribi appears very long for all the team as we were all seated on luggage as we could …
The hotel was really near the sea, so the location was fine, but we would have expected more place for antennas. 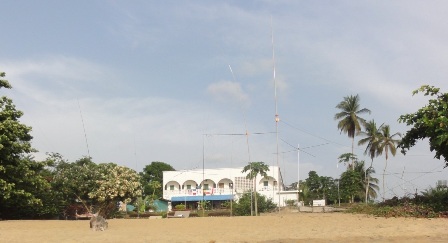 Anyway in about half a day all antennas were almost ready and we could start with 4 stations February 11th afternoon. Yann f1ngp was in charge of computing system, Jean Paul f8bji installed all stations while the rest of the team works outside with antennas.
The internet connection was so slow that is was really a very hard job everyday to upload logs.
Pileups were immediately huge with very strong signals coming from all around the world.
The last 2 stations have been setup later in the night.

During the whole dx-pedition we have been very disturbed by power failure. The backup generator was working fine but wasn’t big enough to support all amplifiers at the same time.

On the 4th day, thanks to the sun, SFI was up to more than 100, giving us very nice openings on high bands. We have added a few vertical dipoles directly on the beach so we could operate with all stations on high bands during daylight. On the other hand low bands were very difficult during night time.

The receiving system for low bands has been improved every day, we used many beverages (up to 200m and more) but we had to replace some of them a few times because the wire disappeared…

Days after days we did statistics and meetings with our pilot station f6aml to consider all comments that could help. We tried to give attention to all parts of the world. 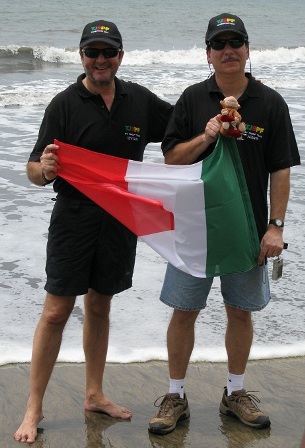 During the whole dxpedition the team was in a very good spirit, everybody worked hard, was right on time for radio shifts, etc.. It is the result of many years of work from all f6kop team members.

Only two days before the end we were now far from the digi-qso number world record of ZL8X (previous one belongs to us with ts7c). So we decided to use 3 stations for rtty, one for ssb, one for cw and one as a flex. Everybody was very motivated!

We have been visited by On4cox who now lives in Kribi, and by Lionel tj3sl. The official police also came and checked all our authorisations, licenses:  of course everything was OK. We have also been interviewed by two different national televisions.
We stopped transmitting on February 20th around 1 pm, packed back all equipments and went back to Douala airport.
In Paris we have been welcomed by our friends f6aoj, f1hre, f0ebs, f5iow. After a last coffee all together everyone went back home.

Finally we could not reach our goal of 80 000 Qs due to all power failures and hard conditions on low bands but 68 000 is quit a good score in 9 days, and cherry on the cake we took back our RTTY world record!

We would like to thank all f6kop team members who helped in France before, during and after the dxpetition.

Thanks to all our sponsors

Also big thanks to all individual sponsors

Thank you all for your confidence, we are already working on the next project, see you in the pileup. 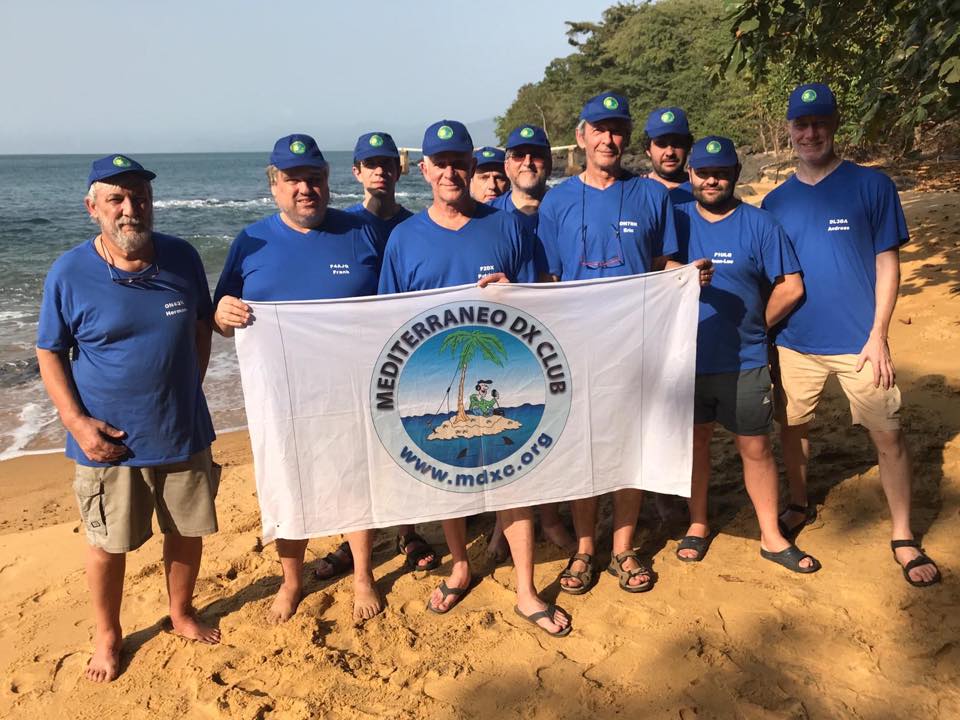